The practice of binding books in human skin, or anthropodermic bibliopegy, is an aged practice that has caught my attention as of late. Recently, a book from the Harvard University library has been revealed to have a rather more unusual binding of the aforementioned type. The 19th-century tome, entitled Des Destinees de l’Ame (or, translated, Destinies of the Soul) was found to have been covered by the skin of a female patient from a mental hospital who died of natural causes. Researchers utilized a technique called peptide mass fingerprinting (PMF) to determine that the proteins in the book were not of a more animal origin, and further tests concluded the skin as human.

Anthropodermic bibliopegy was a relatively common practice in the 1800s. It could be preformed as a curios, a memento, or as a punishment for criminals. One seminal example of the latter idea relates to notoriously infamous murdering pair William Burke and William Hare. The two men profited from a lucrative, ten-month-long career as body snatchers and sellers, offering them up to medical establishments for profit. In the end, after neighbors reported seeing a cadaver in Burke’s bed and victims were discovered in the dissection room of one Dr. Knox, Burke and Hare were arrested, tried, and found guilty for the murders of 16 poor citizens. Hare ended up agreeing to provide evidence against Burke so that he could escape prosecution. Burke wrote his confessions in 1829, before being hung and dissected on January 28th of the same year. The dissection was ordinary at the time, as the Murder Act of 1752 required all murderers to be publicly dissected as additional punishment. While this murderer’s skeleton can today be found hanging in the Edinburgh University Museum, his skin had a rather different ending. Burke’s skin was made into a small, dark brown pocketbook embossed with gold letters that read ‘BURKE’S SKIN POCKET BOOK’ and ‘EXECUTED 28 JAN 1829’. Today, it can be found at Surgeon’s Hall in Edinburgh.

One last question may remain-how was anthropodermic bibliopegy carried out, pertaining to the processes used to turn the skin into the binding of a book. Unfortunately, the tanners did not leave much behind in terms of written evidence (besides account books), however the books that have been collected to this day have a homologous feel and appearance to an ordinary leather-bound one, which suggests that the human skin was treated much as your usual other animal hides. Historically, the tanners removed any possibly discoloring blood by washing and soaking in water, and then soaked in a lime- or sometimes even urine-containing solution. The latter action’s purpose was to loosen the hair and fat on the skin. Afterwards, they were washed again and then treated with tannins and oils to prevent them from drying too quickly, before being hung out to dry. The skin was left to dry for about 7-10 days, at which the skin was soft and stretchy, and could be used for book-binding purposes. 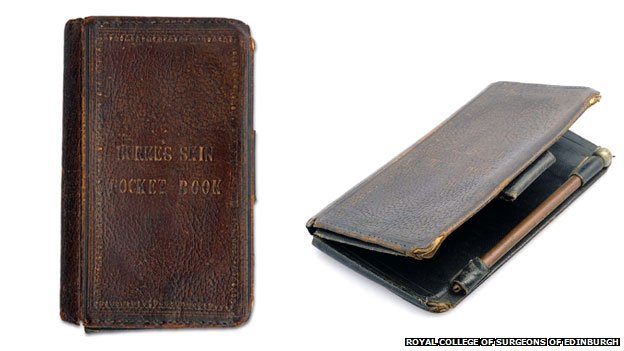 The pocketbook made from Burke’s skin.